How to survive cheesy holiday photos 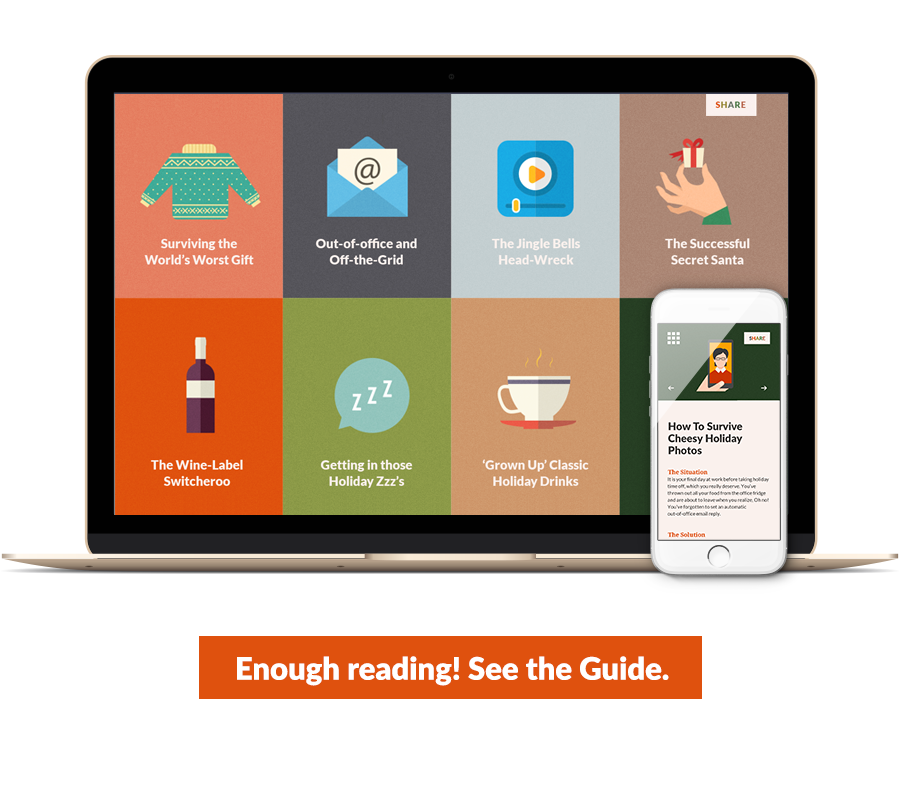 From: How to Survive the Holidays: the complete field guide

For our holiday gift this year, the Blender team has selected eight holiday horror scenarios and provided you with step-by-step solutions for survival and endurance during the crazy holiday season. Read Scenario #8 below, or click the button above for the full online survival guide experience!

It’s time to gather around and take a cheesy family holiday photo. No one really wants to squish together on the couch and fake smile for 10 minutes, but the grandparents are insisting and you can’t let them down. The problem is you are an awkward human being.

Hair: Check for flyaway hairs and stray pieces of food. If born with cowlick, pat that sucker down.

Eyebrows: Raise slightly to appear excited at prospect of taking photo. Not too much though or you will come off serial-killer-esque.

Eyes: Keep wide open and avoid excessive blinking, as this will lengthen duration of photo shoot.

Teeth: Are there leftover brussel sprouts wedged between your front teeth? No? Are you sure?

Shoulders: Pull back to create effect of standing up straight. Avoid hunching or risk the weird no-neck look.

Arms: Keep at sides. Resist temptation to swing or flail. Do not, under any circumstances, put arms around shoulders of surrounding family. Everyone is already uncomfortable.

Poses to avoid at all costs:

This is not a bathroom mirror selfie. This is a cherished memory in the making.

Even if you have won Male Model of the Year three years in a row, this is not the time for this pose.

Like what you see? Want to see all the How to Survive the Holidays scenarios on a big, beautiful, interactive website? You bet you would. The button’s right below, and the site works great on your desktop, tablet, and phone. Try it!